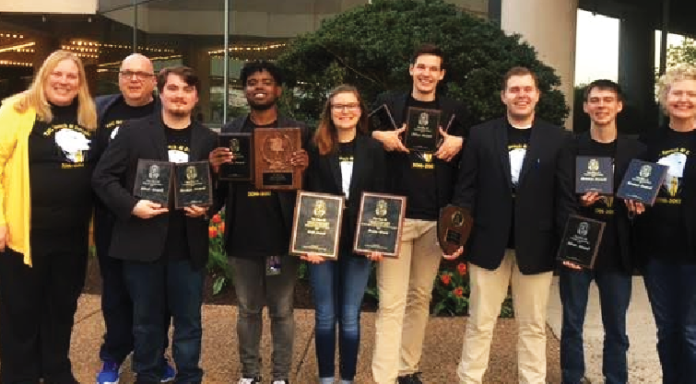 The team traveled to Peoria, Illinois on the week of April 4 for the prestigious American Forensics Association National Individual Events Championship Tournament where they competed against 74 other institutions from across the country, including community colleges and universities.

“We compete head to head in the individual categories with them [universities],” said M’Liss Hindman, Director for the Speech and Debate Team. “Our kids consistently place, I mean, we do well against them.”

The competition was very tight. Only four students got the chance to attend the event and were outnumbered by the other teams. El Paso Community College, which received first place, had 30 entries, but that didn’t stop the Apaches from succeeding.

“We only took four students and we entered in seven events, and the school that beat us had over 30 entries and 12 members,” said Hindman.”So they had three time as many students and a lot more entries and yet we were still able to win second place. Quality-wise, our kids did really well.”

The debaters also attended another national competition, Phi Ro Pi in Washington D.C. on the week of April 13. They returned to the Apache territory with one gold, two silver and five bronze medals.

“Washington D.C. was a great experience,” said Hindman. “We have a very heavy debate team this year… Omari Hawkins won first place, gold, in prose interpretation, so that was phenomenal, I mean, he’s the top prose interpreter in the nation on a community college level. Our debaters did really well as well.”

The result of the debater’s excellence led the team to rank in all three sweep categories of the competition, something that happened for the first time in many years. Also, the students were not the only ones to bring awards home. Joan Andrews, Assistant Director for the Speech and Debate Team was the winner of the esteemed Collie-Taylor Fellowship Award.

“That is an award that is given to someone who kind of epitomizes the great coach attitude, someone that is helpful, supportive, and is a ballot writer,” said Hindman. “Someone that is friendly towards students, fellowship, kind of embodies all of that, so it’s kind of like the most valuable player award for coaches.”