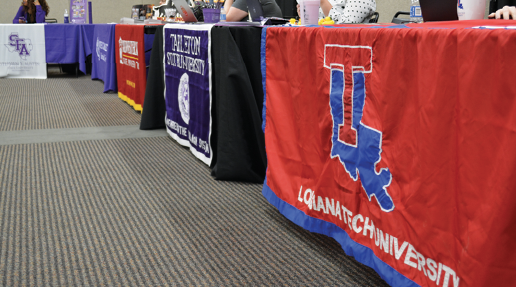 After a lower-than-average turnout for the spring University Transfer Fair on April 10, eyes are set on the first United Kingdom transfer event at TJC.

“There have been other universities that have come and done other presentations,” said Jan Adams, director of Academic Advising. “But this is different in the sense that they’re here recruiting students to come to the London area and go to their universities.”

“I don’t know how many students are interested in transferring to Europe, but this is a good opportunity to actually talk to some representatives face-to-face,” said Adams. “We hope students or faculty and staff will come and visit and listen to what they have to say. They’ll be more informed if students are more informed later on.”

This will be the first time that international schools have come to speak and recruit transferring students at TJC.

“While they were in Texas, they wanted to hit some of the community colleges and we were one of them,” said Adams.

Although the University Transfer Fair had less than half the attendance of the fall transfer fair, freshman still have a chance to speak with recruiters from universities later this year. Recruiters from TACRAO (Texas Association of Collegiate Registrars and Admissions Officers) will be in East Texas in mid-November.

“They travel through all the different high school events and college events throughout the year,” said Adams.