Video game tournaments back on campus 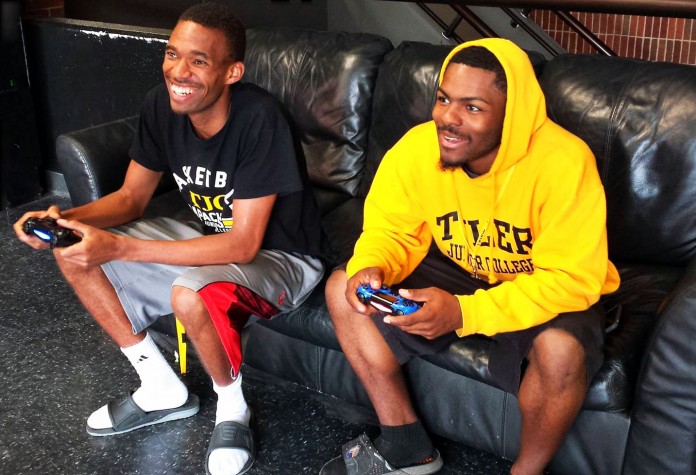 Although the heat rises and the flowers start to bloom outside, some people are staying indoors at the Rogers Student Center to prepare for the TJC Recreation Center’s upcoming video game tournaments.

As soon as April hits, they start the video game tournaments. They play Madden NFL, TEKKEN, and Mortal Kombat, according to Eric Book, coordinator of Intramural Sports at TJC.

The TJC Recreation Center, which is located on the second floor of Rogers Student Center, has been hosting basketball, pool, ping pong, and soccer tournaments throughout the semester and, now that spring is finally here, they have begun the video game tournaments. The Rec Center has three TVs set up for the tournaments and two types of gaming systems.

“The tournaments are very competitive,” said Dameion Spears-Mitchel, sophomore TJC student. “Everyone knows each other so they want to beat each other. That’s what makes it interesting.”

The tournaments were created three years ago due to popular demand according to Book. It lets students come and show off their skills with the controller. It also allows them to take a break from the books and enjoy some friendly competition with fellow classmates.

“The goal is for students to be able to connect with each other,” said Book. “It gives students something fun to do, and a good way to get students involved.”

The tournaments are all free for TJC students with a valid student ID. The day of tournament, participants just show up, sign their names and they will then be put on the tournament bracket. There is not a limit to how many students can sign up for the tournament.

“The tournaments are a great way to spend your free time,” said Brianna Doty, sophomore TJC student and employee at the recreation center. “They are fun to watch, and a great way to meet friends and chill.”

The first tournament was held on March 31, when students came to show off their skills in the classic game “Mortal Kombat” played on the PS4. Students were assigned a competitor on the bracket. The students then picked which Mortal Kombat character they would fight with and began the gruesome fight to the finish, where the winner of two of the three rounds won that round for the tournament and moved on to the next competitor.

“The tournaments get competitive,” said Ladarrion Richardson, sophomore TJC student who participates in the tournaments. “It’s all about memorizing the different combinations and how fast you can actually do it to get the win.”

While some battle it out in fight to the death, others are preparing to leave it all out on the field in Madden NFL. The Madden NFL tournament is the last tournament that the Recreation Center will host at 5 p.m. on April 28 and will also be played on the PS4. The tournament consists of two players who pick their favorite teams to go head-to-head. The game has the same rules as a regular football game and is played the same way. The winner will move up in the bracket to challenge the next competitor.

The tournaments usually last around two hours, depending on how many students sign up and how fast they play the games. At the end, the winner of the tournament will win a gift card and a T-shirt, and the runner-up will win a T-shirt, as well.

For more information on how to get involved with the tournaments, visit The Recreation Center which is open to all TJC students from 8 a.m-7 p.m. Monday through Thursday and 8 a.m.- 5 p.m. on Fridays. To keep up with upcoming tournaments, go to “Tyler Junior College Rec Sports” on Facebook or tjc.edu/events.