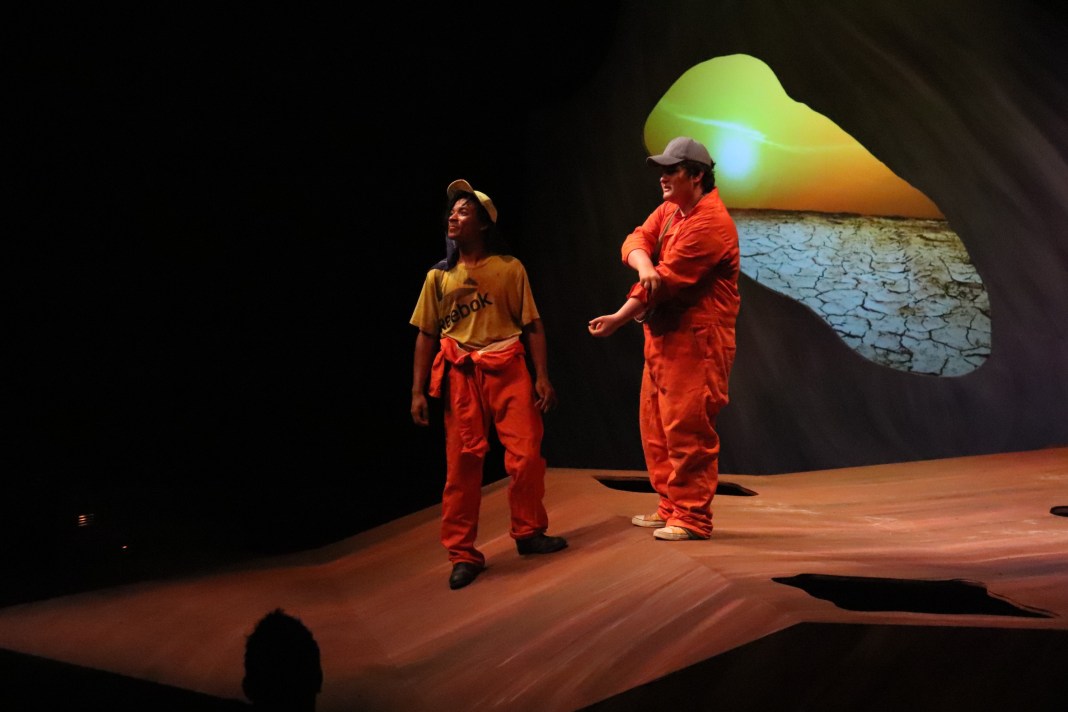 A vivid and immersive display, some interesting nicknames, a lesson in understanding, and what can only be described as hazing and bullying. All four of these elements combined to form TJC Theatre’s second performance of the semester “Holes.” The DrumBeat attended the first showing of “Holes” and the performance was as consistent as ever.

Similar to their production of Disney’s “Descendants: The Musical,” the stage design for “Holes” was once again incredible. The crew used a simple, but effective strategy to create the illusion of the cast digging holes. The strategy was simply making a hole in the set for each of them and creating noise to simulate the digging of an actual hole. Practicality aside, the stage had craftsmanship written all over it. There was detailing on the rock texture to simulate weathering and erosion. The set had a see-through projection screen where different parts of the day would be projected on to it, and the way the background interacted with the stage lights was simply astounding to watch. There were also several scenes in the play when the actors would walk up and down the aisles bringing the audience much closer to the action.

The cast once again portrayed their roles quite well. The friend group of boys acted just like an actual friend group of boys in the sense that there was rambunctious laughter, some playful teasing here and there, and the usual friend group shenanigans such as hitting one of your friends on the side of the head with a shovel. The progress between Stanley and Zero, played by Hagen Howard and Isaiah Person respectively, was another key relationship in the comedy-drama. Seeing Zero go from being quiet and reluctant to develop any sort of attachment to being best friends with Stanley felt natural and nourished; the two had some incredible chemistry on stage. Another great casting was Manasseh Matatila as Madame Zeroni. The costume team did an incredible job getting Matatila to envelop themselves in the role completely.

The only true issues were some lines here and there being too quiet, but that is a minor issue.

The DrumBeat was able to get interviews with cast members before the first showing of “Holes” and see how they felt about their roles and the production.

“I think Stanley has no friends when the show starts and then he slowly builds a very good friendship with Zero, so I think it was cool to feel that kind of friendship kind of go into the show,” said Hagen Howard, the freshman theatre major who played Stanley. “I piggybacked off of the energy of the people that were on stage with me, the other boys and all that. I think realizing that they were gonna just be having fun made me just want to have fun with them.”

Howard’s insight into how he embodied his character made everything on stage make sense. The boys looked like they were a big group of friends because they actually were. They already had a well-established connection, the only task was displaying it on stage.

“I get to tell Zero’s story because in the beginning it’s not really told,” said Isaiah Person, the freshman theatre major who played Zero. “He’s more of a quiet, off-to-the-side character, but in the second act getting to you know, tell my story more in depth, not just about the shoes, but about my mother and then hearing about Stanley’s side of the story and just connecting the dots. Within the show, we’ve built that brotherhood in between the two of us.”

Person’s portrayal of Zero was one of the highlights of the show as Zero changed his behavior because of the kindness he was shown. The shift was shown through Person’s change in acting style from one act to the next becoming a much more expressive and open character.

“Holes” was the final TJC Theatre production of the semester, but there will be two more in the spring semester. The two productions of the spring will be “The Glencairn Sea Plays” by Eugene O’Neill from Feb. 22 – 25, 2023 and “Metamorphoses” by Mary Zimmerman from April 25 – 29, 2023.