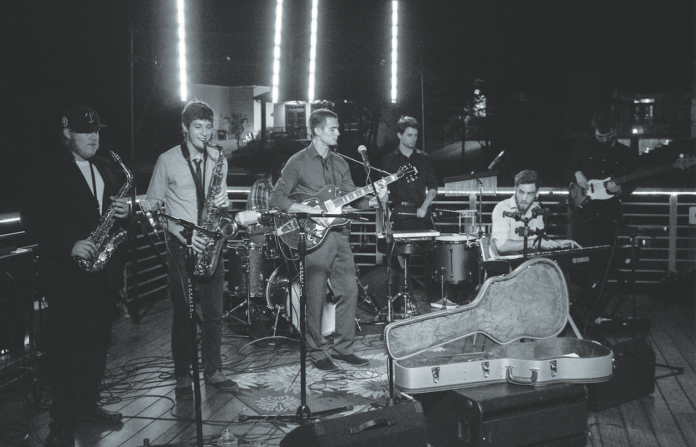 Tyler is about to experience the musical and artistic gathering many have been waiting for. On Feb. 11, some of the best local talent will be converging at what will be titled The Lemonade Collection.

“Over the last year or so, I have realized how much of a need there is for a music community here in town, because there’s a lot more than people realize,” said Douglas Jay Boyd, music coordinator at Juls. “There are a lot of talented folks that need more outlets and more opportunities and that’s really something that I’m shooting for.”

Boyd has spent many years of his life as a traveling musician. For a time, he was traveling the US, Canada and Europe with up to 340 performances each year. But since he’s been in Tyler, he has mostly focused on being the musical coordinator at Juls on Old Jacksonville Highway.

“Having been on the other side of the music world, and then coming to more of the back end of it, I have been able to apply a lot of what I have experienced in trying to make things work here in Tyler,” said Boyd. “To help grow not just Jul’s as a venue, but help push local musicians to be better in all aspects.”

With his connections, Boyd has managed to coordinate the musical artists appearing at The Lemonade Collection, while TJC graduate Lenora Hill has gathered the visual artists. With a $3 cover charge that will go entirely to the artists, this event is aiming to bring Tyler’s college community out for an artistic gathering.

“There’s a lot more happening than what people realize, and the exciting thing is the more I get to know those folks, the more people start coming out of the woodwork,” said Boyd. “There are not that many spots around here that aren’t geared towards the country scene … There should be more opportunities for folks that are doing something different.”

One of the main musical talents appearing will be local band Pocket Tangerine.

McGraw is hopeful that The
Lemonade Collection will be a great improvement in Tyler’s music scene.

“It has improved a lot, you can definitely say that. … I think Tyler should grow its reputation to bring a show that people want to come see,” said McGraw. “The artists need to be on their game, bringing the best that they can, but also that people should give them a chance.”

All of the members of Pocket Tangerine met while attending TJC. Michael Heatley, the band’s bassist, also believes the event is a great opportunity for the visual art and music communities to unite.

“We’ve got these two really cool things in Tyler, and they should be together, but they’re not yet,” said Heatley.

One of those visual artists, student Andres Breffitt, plans to be making graffiti art pieces live throughout the day.

“With everyday life, you just don’t have enough time to make art,” said Breffitt. “If I start an art piece, I’m the kind of person that will stay on it for like six hours, ten hours if I have to.”

Although he does perform other types of visual art, Breffitt’s love of spray paint designs spawned from watching the 2010 documentary, “Exit Through The Gift Shop.”

“I watched the movie around 11 p.m., and finished around 1 in the morning. Then I went straight to Walmart, and bought two spray cans — a black one, and a green one. I spent like $3 on those two. Since that moment, I’ve really liked the graffiti part of what I do.”

Along with artists and musicians, The Lemonade Collection will also have crafts, spells and tarot readings by TJC alumnus Laurel Hill.

“Energy work, is how I would describe it,” said Hill. “At the very core of my work, I would call myself an energy healer.”

Another local musician that will attend is Meredith Crawford, who in recent years has gained quite a level of popularity in the area.

“Recently, I’m actually getting to dig into the music scene, and I’ve thoroughly enjoyed it,” said Crawford. “There’s, like, an underlying community of musicians that I’m tapping into, and it’s great.”

Crawford plays what she identifies as folk rock. She used to perform in a band, but she has performed solo more recently.

“I’m hoping this will kind of bring all of these musicians together into a little melting pot. It’s not about a competition, it’s about supporting each other,” said Crawford.

Local ceramicist and TJC art student Hannah Perry will be exhibiting and selling some of her ceramic creations. Ever since she discovered clay, she has used it to express herself and gift those around her.

“Potters are referred to often in Scripture and used as an example of the relationship we have with God where we are clay in his hands,” said Perry. “I find pottery relaxing and therapeutic.”

Sean Smith, a TJC student and painter, will also be creating visual art throughout the event. This will be his first time painting in public. And, for the most part, he hasn’t even shown his artwork to people.

“I haven’t shown a lot of people my art. I’ve just been doing it at home, kind of stockpiling it until I can do something with it,” said Smith. “But, on the other hand, I want people to have insight on what I have been working on for so long.”

Smith is aiming to go to the prestigious Ringling College of Art and Design after TJC.

“I’m nervous about it, but I’m excited. That motivates me,” said Smith.