The next big death in Marvel will be the MCU 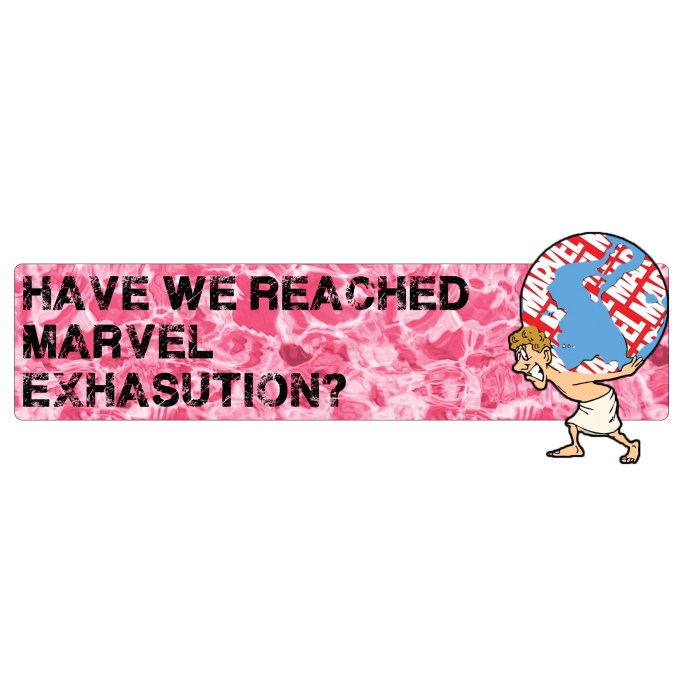 The Marvel Cinematic Universe, or MCU, made 23 movies in 11 years between “Iron Man” in 2008 and “Spider-Man: Far From Home” in 2019. That’s an average of about two movies every year. The current MCU schedule has them releasing at least 23 movies or shows in the next three years and three months. That’s an average of almost seven projects a year. This undermines viewers and workers in many ways, but there are two main ones: The horrible treatment of visual effects artists and the fatigue such a constant stream of content from the same source can do to viewers.

Is the Customer Always Right?

If one thing is certain about MCU movies, it is the infamous CGI heavy third act. Those sequences do not make themselves; hundreds of visual effects artists make them over several months. Within this time frame, Marvel has a strict schedule, according to Vulture, a source for daily coverage of TV, movies, music, books, theater, art and the entertainment industry.

“It sets dates, and it’s very inflexible on those dates; yet it’s quite willing to do reshoots and big changes very close to the dates without shifting them up or down,” as told to Vulture writer Chris Lee by a visual effects artist who has worked with Marvel.

The visual effects artists are getting rigid timelines that Marvel is not following. Even if artists submit their work on time, reshoots may mean they need to scrap their work and start again as they may drastically change the way the project looks. The timeline is not updated to accommodate them, however, which means they must do the work just as well, but in much less time. “Maybe a month or two before a movie comes out, Marvel will have us change the entire third act. It has really tight turnaround times,” the VFX artist told Lee. The only relief is they still get several months before their work needs to be done, right? Well, at least it would be several months if not for “a demand to see near-complete work much earlier in the process compared to other clients,” said Jennifer Bisset in an article published by CNET, a media company publishing reviews, news, articles, blogs, podcasts, and videos on technology and consumer electronics globally. “Marvel requests work be done much faster than originally planned” as told to Lee. This strategy is so the studio can have the skeleton of the movie prepared as fast as possible. This strategy is surely effective for Marvel Studios, but for the visual effects artists it means longer hours, less breaks, missed events and all the added stress that comes with tight deadlines.

The system is functioning exactly as intended. “The VFX industry is deeply broken. It exploits artists using short-term contracts, chases tax incentives across the globe, and creates an environment where production studios, especially an industry giant like Marvel, are treated with a deference that comes at the expense of the artists’ craft and mental health. VFX is a machine designed to destroy artists. And it’s working perfectly,” said Linda Codega of Gizmodo, a source that covers technology, science and genre entertainment.

Ultimately, the goal of every company under capitalism is to decrease costs in order to increase profits. The VFX industry has figured out exactly how to extract all the labor they need from VFX teams, with little to no compensation. Workers are being exploited by the industry, and as time goes on, the conditions seem to worsen by the minute. These conditions are finally garnering some attention due to people being willing to share their story of working with Marvel. In an article written by Matt Roembke of The Direct, a pop culture entertainment  site that covers Hollywood, movie and gaming news, “recently, these artists have spoken out on social media about the ‘toxic relationship’ between VFX Houses and Marvel Studios. The issues lie mostly in the number of unexpected hours that the Disney juggernaut demands during pre-production.”

The state of the industry is finally being brought to light and people are starting to take notice. The workers who have come forward and expressed their dissatisfaction with Marvel’s blockbuster machine have taken a huge step in the right direction in their fight for workers’ rights, because enough bad publicity leads to damage control, and that is where the workers can gain some footing. The workers aren’t the only ones upset at the rate content is being put out, the fans are getting tired of the constant content too.

The concept of Marvel fatigue has been around for some time now. An article by WhatCulture titled “10 Reasons You’re Getting Tired Of Marvel Movies” dates April 29, 2015. That was back when there were only 11 MCU films out, compared to the now 29 MCU movies. Continued success is a factor as to why Marvel would perpetuate this phenomena themselves.

According to Jillian Unrau of GameRant, a company publishing gaming, entertainment, and pop culture related content, “There was always something exciting about a new Marvel premiere and the hype surrounding it, while now the new releases feel almost under-hyped, as if Marvel knows that they barely need to market their content anymore because people will just show up in droves to see it if it’s part of the MCU.”

The content Marvel puts out is so well established at this point that people will show up for any movie with a Marvel logo in the opening credits. The company sees this and ultimately decides quantity is much more important than quality because the quality does not seem to impact the profit margins as much as it would for other studios. This is evidenced by “Eternals,” which has the lowest Rotten Tomatoes score of any MCU film at 47%, but still made over $400 million according to Box Office Mojo, a site that keeps track of how much money movies make in theaters. However, there is only so much slog fans can handle before they give up.

“Crossover hits like ‘Spider-Man: No Way Home’ and hardcore fans are the obvious exception, but right now the fatigue that wasn’t present when the universe returned after the pandemic has begun to set in. Gone are the times when I could tune in for the bigger films and not feel lost amidst the noise, or anxious that I hadn’t done enough homework and would be lost amidst the new characters and references that I simply wouldn’t understand,” writes Jade King for The Gamer, a media website with a focus on video games, movies and TV shows.

Not only are the newer films coming out at an accelerated pace, but they all also link back to each other in a way that makes it seem like a requirement to watch all prior pieces of mediocre media for the next piece of mediocre media. There used to be two movies a year, maybe one of them was a team-up, and people would be satisfied with it. Disney saw this pattern and decided to triple it with almost everything being a team-up once the pandemic allowed for business as usual for Marvel Studios.

Disney and Marvel seem perfectly content with seeing the MCU go downhill. According to AA Dowd of The Guardian, “With opening weekends like the one ‘Love and Thunder’ just logged, there’s little incentive for the studio to slow down its assembly line, or even to pay much attention to the individual quality of the entries dropping off it. Maybe these movies are a little worse than they once were because they can be.”

The sad reality of the fact is the formula is still working. The money is still pouring in. The characters are attracting fans and the wheels have not fallen off the bus just yet. However, if Disney or Marvel are wise, they’ll notice fans are getting tired and VFX artists are getting louder about the abuse they experience. Either they blow this bubble until it bursts, or they learn from their mistakes and improve their profit-motivated practices until they value quality again.