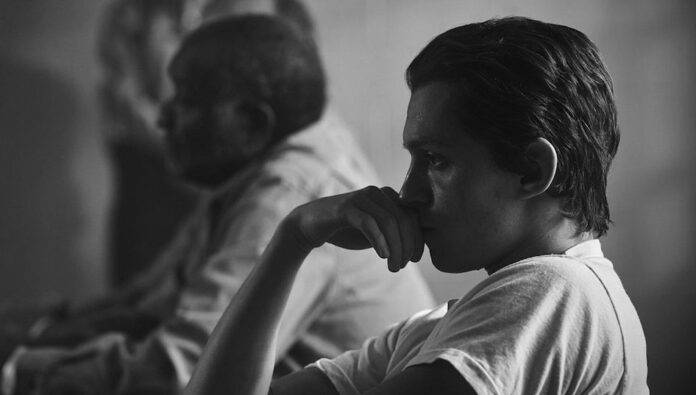 Oftentimes, films are centered around a message or theme. Sometimes this message or theme comes through clear as crystal, carrying the film with a sense of purpose, no matter the runtime. Take Denis Villeneuve’s “Blade Runner 2049” for example. Aside from the stellar performances, mind boggling set design and gorgeous cinematography, the film carries its message of finding one’s worth so poignantly that this theme of self-worth is what cements that film in my memory. I wish I could say the same for “Cherry.”
Based on a 2018 autobiography by Nico Walker, “Cherry” attempts to tell the tale of a nameless protagonist (played by Tom Holland) as he is consumed by the American system, from falling in love in college to becoming a victim of the opioid crisis. This is a real issue that needs to be discussed, but “Cherry” never feels focused on even bringing these issues up. The film is too focused on trying to make you think it’s cool. Each moment in the film is so polished, that it feels like you’re watching one of the Russo Brothers’ Marvel movies. This is supposed to be a film about a soldier turned opioid addict, but every shot is so crisp, every actor is so perfectly dressed, every musical choice is so formulaic, you never forget you’re watching a company product.
Another damning aspect of the film is nothing feels real. The characters, their actions, and the depictions of violence and drug use feel like no one involved has even stepped foot off of a Hollywood set. I’m not promoting drug use, but if a character in your film is experiencing the effects of hard drugs, someone in the process should have some kind of knowledge of how people on those drugs act.
Tom Holland is supposedly playing a character taking all kinds of drugs across his life, but acts like he only has a schoolboy’s grasp on the matter and that goes for the whole cast. People on screen constantly talk about doing shady things in a manner I haven’t seen since after school specials. Nothing but surface level, “drugs are bad” messages without coming close to tackling the issues that threw a staggering percentage of our country into the deadly arms of opioids. If that was the only thing that soured me, I could just write this film off as not knowing its material well enough. But, “Cherry” does all this with an infuriatingly smug tone.
You see, this movie isn’t satisfied with showing you a story of the American Dream harshly crashing down on a young man. It also wants you to know how much smarter it is than the whole system. There is an incessant narration by Holland throughout the film that carries the tone of a teenager. You know, that kid in your junior year class who spouts nothing but sentiments of “none of this matters, anyway,” when presented with classwork.
Holland’s “Cherry” is always attempting to wax poetic, but never reaches anything deeper than “don’t join the army.” This edgy, teenaged attitude is completely ignored when it comes to the aforementioned visual depiction. Even though the narration is condemning the army for being “little kids playing in costumes,” the film is shot in a way that is obviously glorifying our troops committing travesties overseas. Triumphant, sweeping shots of Humvees carrying stoic, manly men who are out there doing masculine things with maximum cool factor. All the while Tom Holland is trying to tell you how stupid it all is.
My earlier mention of a back to school special might be the most apt comparison one can come up with. The issue is, an after-school special normally was 30 minutes on the long end. This is a two-and-a-half-hour slog that simultaneously preaches at you while forcing you to literally look out of Tom Holland’s rectal cavity during a military physical. I wish I was making that last note up.
“Cherry” has had its short theatrical run and now is available for streaming on Apple TV+, but if you have the service and almost three hours to spare, maybe watch the animated treasure “WolfWallkers” and give an episode of “Ted Lasso” a shot instead.