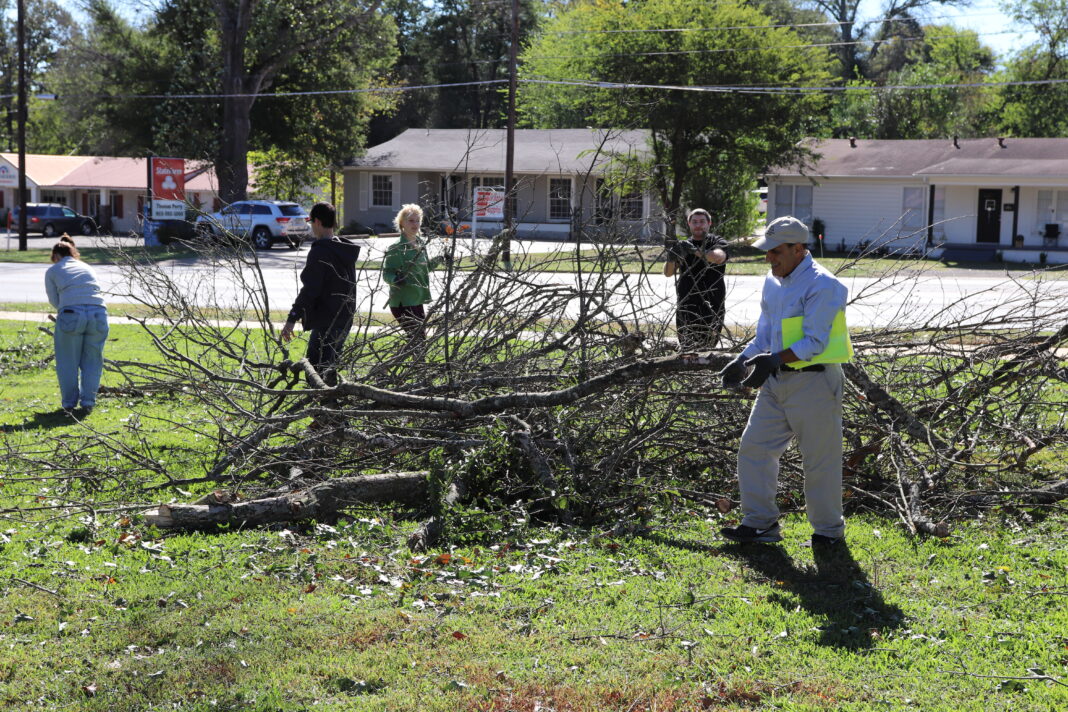 Due to high winds, tree limbs fell across campus during the last week of October. On Oct. 28, one tree limb caused roof damage to Jenkins Hall.

“This morning I was walking to my Psychology class, running a few minutes late and then I heard a noise that sounded like it was breaking,” said Sarai Trejo, an ultrasound and sonography freshman at TJC. “And then this guy was behind me and he yelled at me to move, and when I looked up I saw the tree start to fall, so I ran.”

Drake Rawson was another student who was also walking to class before he heard the same breaking noise.

“I was just walking to class and I started to hear a cracking sound coming from the top of the tree I was under,” Rawson said. “I looked up and saw the top was about to fall so I ran. Next thing I hear is the tree hitting the ground behind me. I snapped a few pictures and went inside for my class.”

This incident caused Rawson to be appreciative of his escape.

“I was scared the entire class. I couldn’t help but think how lucky I was to be sitting there,” Rawson said.

The sidewalks between Potter Hall, Jenkins Hall and the main plaza were closed due to blockages. Students were redirected to walk through surrounding buildings. These areas have been cleared and normal routes are open.

Director of facilities and construction Mark Gartman explained TJC’s response to the windstorm.

“In regard to actions taken during the windstorm, TJC quickly cordoned off the areas impacted by the falling limbs and had campus police officers (and other designated employees) in place to provide directions to those who might be in the area,” Gartman said.

Text, email and phone messages were sent through the RAVE emergency alert system to warn people of potential hazards.
Other areas of Tyler were affected by the high wind speeds. The National Weather Service clocked the wind traveling northwest at a speed of 31 mph with gusts as high as 43 mph.

Shane Pendleton, a meteorologist with the National Weather Service office in Shreveport, Louisiana explained why the wind speeds are abnormally high.

Pendleton explained the wind correlated with the storms that moved through the region beforehand. He said to think of it like “a really strong river flowing south from the Great Plains, and the low pressure system is pulling that wind in, resulting in the higher than normal wind speed.”

In the email alert, Gartman mentioned reasons for the tree limbs falling.

“As you know, the February winter storm killed some of our large trees, and the work to remove dead limbs is ongoing. Please be aware of the potential for falling tree limbs throughout campus.”

Gartman further explained the process for maintaining and trimming the trees, following the winter storm damage stating “the college worked with an arborist to determine the health of the trees on campus.”

“It was determined to wait and assess the trees’ health once the colder weather had abated,” Gartman said. “The college has and is currently working with a tree removal company to take down the impacted trees. This process has been taking place over the weekends to lessen the impact on classes and other campus activities during the week.”

Clean up and repair around campus is ongoing.

TJC students within different organizations took the time out of their day on Oct. 30 to clean up fallen branches across campus. In front of the Jenkins Building there were many limbs and branches down, but these students said they wanted to keep the school clean and have prideful scenery.

Dr. Manouchehr Khosrowshahi, professor of government and International Education Club adviser, was one of the faculty members cleaning up.

“It’s all about the image of the college to look good,” Khosrowshahi said. “After this storm, we wanted the opticals to be good for the public and for students and it not to look trashy.”

Khosrowshahi also discussed how their club along with Student Senate contributed to campus beautification by planting violet plants in front of Jenkins and the White Administration Building.

“We wanted to keep the college looking good,” Khosrowshahi said.

TJC student Taylor Tracy, sophomore and information technology major, had this to say about the clean-up.

“I’ve been in Tyler for many, many years, and I really enjoy the TJC campus,” Tracy said. “I’ve had a great time, and I just want to help out the community.”

Multiple cars were damaged by falling tree limbs on campus in earlier months. Tree limbs falling is considered as “an act of God.” This means TJC is not directly responsible for a branch to fall and cause damage because it is out of human control.

One student, Jayden McTee, had her vehicle damaged by a fallen tree branch.

“I didn’t see the limb that fell but almost the whole passenger side of my windshield was shattered, and there was glass all inside my car, it even got inside my bag that was sitting on the seat,” McTee said. “I called the police back and they sent an officer back out and she explained what happened and took down all my information and gave me here and told me that I should hear from them in a couple days.”

McTee explains how the damage created by the tree still hasn’t been paid for.

“The police told me to contact the director of campus services, and when I called her she said she was sending the police report to their insurance company, but that’s actually the last I’ve heard from them,” McTee said. “No one’s paid for it yet, and my windshield is still cracked. I had to put clear tape on it from cracking more. I refuse to take it to get fixed because I just don’t have the money for it to pay out of pocket right now so until they figure it out, I have to live with it. In my opinion, they should pay for it though, because it wasn’t my fault and there was nothing I could have done to avoid it.”

Students and staff impacted by damage and/or injury related to falling branches can file an insurance claim with the campus. According to Rebecca Sanders, director of public affairs and media relations, the claims process is as follows:

Coverage determination is not made by TJC. The adjuster will make the final determination as to whether the claim is covered or not.

Gartman said efforts have been made to provide safety to students during the hazardous situation.
“TJC takes decisive actions to address campus issues arising from natural causes that could not have been prevented by reasonable foresight or care,” Gartman said.

The Facilities, Police and Institutional Safety departments are to work together to implement safety strategies through engineering and administrative controls during times of natural hazards.