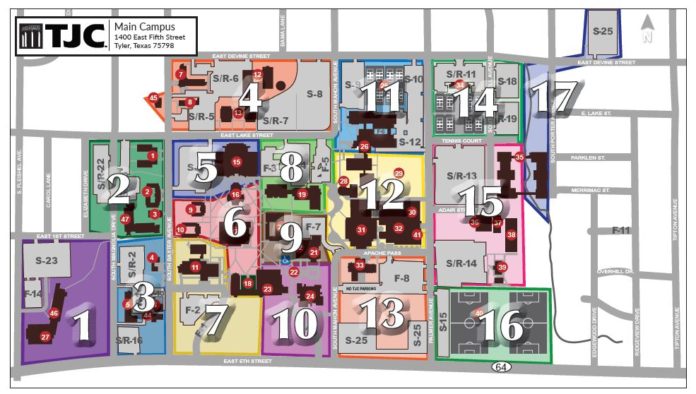 The Keep TJC Beautiful initiative aims to improve and maintain TJC’s campus. The initiative provides numerous way for students to get involved: a yearly Arbor Day event, an Adopt-a-Spot program, and a recycling system. Lauren Tyler, Director of Student Life, said that the initiative has seen rapid growth. “It really started last year with our first Arbor Day event. We had about 200 volunteers on March 5th last spring.”

Then, in the fall, TJC officially “adopted” its own campus through the City of Tyler’s Keep Tyler Beautiful program. “We then broke out the campus into seventeen different zones, or ‘spots,’ and all seventeen spots were adopted by organizations,” explained Tyler. Student organizations who adopt a spot on campus promise to meet and collect trash from their spot at least twice per semester. Signs around campus label which organizations have adopted certain spots.

The initiative has also resulted in a revamped campus recycling system. After creating a recycling program for on-campus students, the Residence Hall Administration noticed an increasing amount of participation. Now, all students can participate in recycling pickup on certain Fridays throughout the semester. Tyler described recycling as an “easy way for students to get involved,” and remarked on the high turnout the program has seen. “We filled up every bin last week and then some. We’re already seeing such an overwhelming response.” Tyler also mentioned the impact that recycling at a school as large as TJC could have. “More people live on campus than there are in my hometown. You’re talking about a lot of water bottles and paper.”

In the spring semester, recycling days will be held on March 2nd, March 23rd, April 6th, April 20th, and May 4th from 11:00 am to 1:00 pm in the parking lot behind Potter Hall. Students may recycle #1 and #2 plastics, cardboard, paper, newspapers, magazines, and magazine stock paper. Students can also volunteer at Arbor Day from 2:00 pm to 4:00 pm on March 5th. Volunteers will plant 25 trees on the Jenkins lawn. “We’ll have food and T-shirts,” mentioned Tyler.

But you don’t need to wait for an event to make a difference. Tyler suggested that students should also help keep their campus beautiful by doing little things, such as picking up any litter they see in their day-to-day lives. “It’s more than just one event or one organization,” stated Tyler, “it’s really a campus-wide effort.”