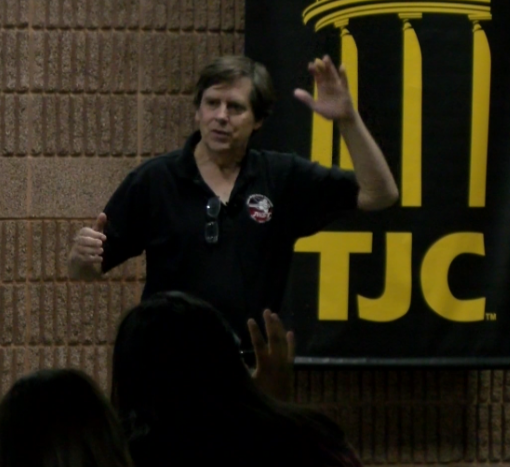 Dr. Scott Acton, wavefront sensing and controls scientist for the James Webb Space Telescope, recently held two public lectures at Tyler Junior College. During these lectures, Acton spoke to those in attendance about his experiences with the project and offered insight.

Later in the evening, a Star Party was held in front of the Hudnell Observatory where those in attendance could view pictures taken by the JWST within the planetarium as well as various celestial objects, such as Jupiter and Saturn through telescopes.

“The Webb Telescope is enormous, it’s bigger than anything we’ve ever put in space on a single vehicle. It wouldn’t fit inside of any sort of rocket,so we had to build it so that it would fold up and unfold once it gets into space,” Acton said. “My job and my team that I worked with was to put it together, basically.”

The James Webb Space Telescope is a large infrared telescope that launched in 2021. It’s intended to be the premier observatory of the next decade as it observes further out than people have ever been able to before.

“Any time you have an instrument that allows you to look somewhere that no one has been able to look before, everything you see is going to be ascientific discovery,” Acton said. “Just the scope of creation completely surprised me. When I realized that the galaxies were so abundant, in my mind, I pictured the galaxies singing.”

JWST has allowed astronomers to observe more than ever, from the existence of abundant galaxies to new images of faraway objects within the solar system such as Neptune.
“What you know about it is irrelevant, if you already knew it, you wouldn’t study it,” Acton said. “Like the prettiness of those pictures, if you’re attracted to them, then astronomy is for you.”
TJC students are encouraged to attend future lectures despite their major or level of knowledge in STEM. Guest speakers like Acton are expected to come to TJC in the future, most notably for TJC’s Darwin Day, that takes place in February.
“The annual Darwin Day is in February, where we bring some very notable people from around the globe here to TJC,” Douglas Parsons, professor of Astronomy, said. “Depending on the success that we’re having with the James Webb talk, that just kind of paves the way for more people to come.”
For updates and information on the JWST, visit blogs.nasa.gov/ webb. For information on astronomy events at TJC, visit TJC.edu.