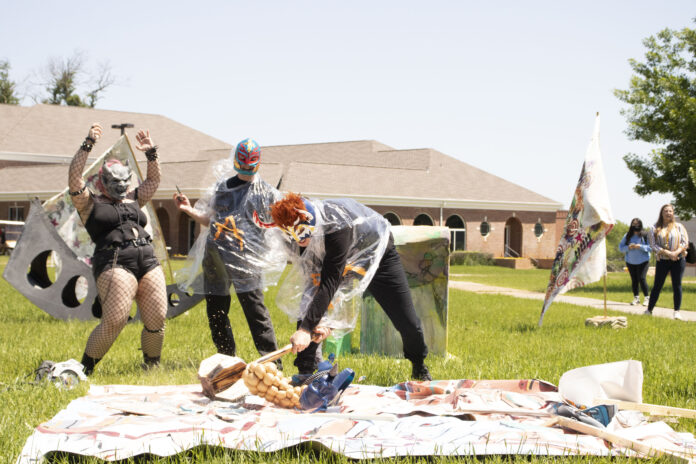 After a two-year hiatus, the Thunderdome Arts Competition took place Wednesday April 27 in front of the Vaughn Library. Often associated with the tag line “two pieces enter, one piece leaves,” the Thunderdome pits two submitted art pieces together, with the loser getting destroyed by volunteers known as annihilators.

To determine the winner of each round, three selected audience members vote on for their favorite piece. Volunteers present each piece to the audience in a round-by-round style tournament, as the judges deliberate. The losing work gets handed off to the annihilators to destroy for the crowd.

This year, over 40 works of art were destroyed in both the faculty and students rounds.

Like winner’s past, Cagle was then presented with a choice, walk away with two hundred dollars and their art intact or go double or nothing with their piece on the line. Four envelopes were given to Cagle, three containing papers with the word “double” on them, and one marked “destroy.”

Cagle chose to risk their piece and go double or nothing, knowing there was a chance for his piece to be destroyed and that the money won would have to be returned.

Cagle ended up with the “double” envelope, taking home their piece, the winning faculty piece, and $400.

The Thunderdome Arts Competition returned to TJC’s Arts Festival on Wednesday, April 27. Volunteer “annihilators” displayed and destroyed a variety of pieces submitted before the competition.

3 tips for how to get involved at TJC