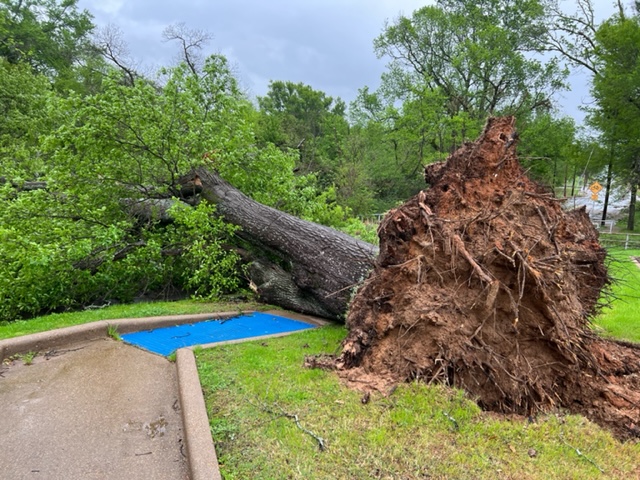 Significant damage occurred across the TJC campus due to a severe storm on April 12. The damage included fallen trees and limbs as well as scattered debris. According to the TJC Alert system, no injuries were reported.

Kim Lessner, vice president for operations and chief operations officer at TJC, confirmed there was damage to the exterior of buildings across campus as well as fallen trees and limbs.

“I think we have documented everything, but we’ll continue to assess as needed. But honestly, we probably won’t have a full report or estimate on the amount of damages for a few days,” Lessner said.

On the following day, some on-campus buildings were still without power, and classes were canceled until noon. However, many students, faculty and employees across campus banded together to help with clean up.

“I just want to give a shout out to the students and the employees. I mean, it’s very clear the love for this institution. People were helping one another,” Lessner said. “Some of our employees came, and then because the operations were closed, instead of going home, they put on gloves, and were safely in working with facilities, they started picking up limbs.”

Some of the groups who participated in cleanup included, Student Life, Financial Aid, Business Services, and Academic Affairs.

“They just were asking for help in a group text and so our staff and others from other departments just decided to help,” said Lauren Tyler, director of student life. “I mean, our facilities and grounds do so much for us throughout the year, so you know when they needed help, we just wanted to chip in.”

The Womans Soccer Team is one of the many groups of volunteers that helped with removing debris.

“I think it’s important to help the community of Tyler Junior College to just clean everything up and also for like the team. It’s also important to like serve others. We try with our team to help other people with just easy things like this,” Demi Van Stappershoef, sophomore defender, said.

Students who signed up for TJC Alerts did receive several warnings regarding the storm and were informed to take shelter. Alerts that were issued informed students of things such as tornado watches, tornado warnings, severe thunderstorm warnings as well as information regarding campus closure.

“Your phone is your most critical asset, because especially for all the employees, and for the students that had RAVE, you know, they were receiving all of their alerts. And obviously, they would have received the tornado warnings, as well. So your phone is your best friend,” Lessner said.

Lessner said when a warning is sent out the dorms have measures in place for students to take.

In the Crossroads dorms, resident assistants are trained to handle weather-specific emergencies. Ryan Charles is one such RA.

“As soon as we get the warning, which usually comes down from the Assistant Director, Emmanuel Sims, he texts us in the group chat. We just rush everyone into their rooms and make sure they get in their bathrooms because those are the safe designated areas in Crossroads,” Charles said.

In addition to taking shelter, students were temporarily left without power on the morning of April 13. Students in dorms without power expressed the inconvenience of the late-night power outage.

Freshman Onyx Pirhalla said, “We lost power last night…and my computer died last night which I needed for classes, and we just got power this morning.”

According to Oncor’s outage map as of 2 p.m. April 13 there were a total of 298 outages in Smith County.

Students who do not live on campus also faced similar issues related to the storm.

“Power went out around my area; trees were falling down. My trash can flew across the land and stuff,” said Kyandra Howard, freshman at TJC.