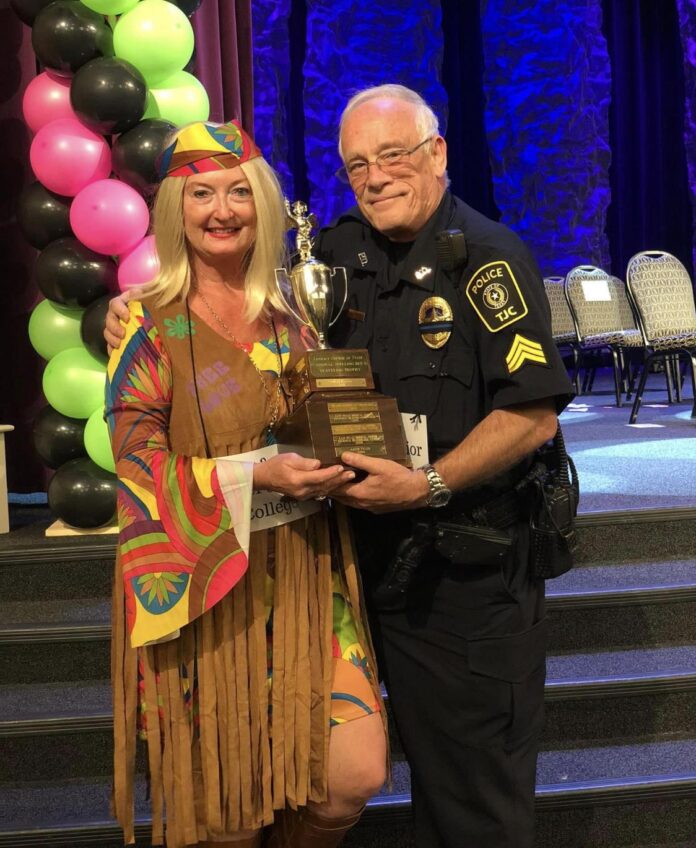 He can be seen all around campus, chatting with every student who crosses his path; a charming and bright smiled man, who just so happens to wear a police uniform. No, his garb is not by coincidence, but a product of his job. Police Sergeant Mark Pierce joined the TJC Campus Police Department in January 2010 and has now retired from his over 23 years of being, in his words, “a peace officer, not a law enforcement officer.”
In high school, Pierce moved around quite a bit, doing year-plus stints everywhere from Santa Monica, California, to England, because his father was a defense contractor. When he came back to Texas just before he turned 19, Pierce began work in a print shop, an industry he would work in for the next 22 years. He ran high speed copiers, did bindery, press operation, and camera work. Before that, Pierce had a variety of odd jobs due to constantly moving.

“I probably had my first job outside the house when I was 14, cooking at the equivalent of a Jack in the Box. Bussing tables, sacking groceries,” Pierce said.

After some developments, he ended up working at the UT Health Center and taking over graphic production at UT Tyler. While running both print shops, he made several contacts with the police officers of both campuses. He remembers members of the force asking him to join, but Pierce said he was entirely uninterested at first.

After much deliberation, Pierce finally decided to work as a guard. At that same time, he took two summer classes at TJC and joined Phi Theta Kappa. After going off to the Academy in Austin, he was commissioned as a certified State of Texas police officer. Pierce is now a certified Field Training Officer, Firearms Instructor, Patrol Rifle Instructor, and has held the role of Master Peace Officer, meaning he has demonstrated proficiency in patrol principles along with having additional responsibilities.

“I have, over the course of my time, worked in investigations. I had a warrant that chased a girl from coast to coast, border to border. I’ve helped the Secret Service with doing warrant prep for them,” Pierce said.

Pierce came to TJC after his work developing the Field Training program at UT Tyler.

“When I first went to work for UT Tyler, we did not have a Field Training Officer program,” Pierce said. “Well, I took it upon myself to research on the internet, and got programs from about five different agencies, and combined them into one. They held onto that program for probably about five or six years after I left.”

After he left, Pierce came to TJC and adapted a training program from the previous one he had developed at UT Tyler. Ever since coming to TJC, Pierce has loved working on campus.

“I love the campus; I love the life. Being around young people helps me stay young. Yes, I’ve got gray hair,” Pierce said. “I just love the energy of being on a college campus.”

Not only does  Pierce love the relationships he’s made with so many of the students over the years, the students love him equally.  Laura Greenwell, a resident assistant and second-year student at TJC, expressed the impact Pierce has made on her, saying Pierce was “the best” and “you can tell he really loves the students.”

“He’s always a smiling face around campus, and always has a joke to crack. He is always checking on everyone and brought lightheartedness to a job that can be anything but,” said Mackenzie Ragan, another resident assistant on campus.

Not only are the products of Pierce’s personability evident, it is also apparent he has been blessed with the gift of humility and wisdom.
“I feel like I’m tooting my own horn… like I’m bragging, and I don’t like that,” Pierce said. “As bizarre as this sounds, I will give you a couple of lessons from being a [Field Training Officer]. When I get new officers, I tell them, ‘There are two absolutes. Always know what you’re doing and why you’re doing it. And the other one, never lie.’ And I find that would be helpful to any young person.”

Pierce is ready to retire, hoping that will give him a time to enjoy his hobbies like firearms and World War II history.

“In my younger days, I traveled and then when I got back, I pretty much lived out of a suitcase for years,” Pierce said. “With my first wife, we might live in three apartments for a year. We were constantly moving. I just don’t want to do that anymore.”

Now that he is retiring, Pierce is ready to spend time with his family, including his youngest granddaughter, who is in the Navy.

While his time at TJC is over, the impact he had on campus is not yet forgotten. Over the years Pierce has been an advocate for students who needed it.

“At your age, I made every stupid mistake there was, and probably some more you can’t imagine. I’ve always felt that helped me in this line of work. People try to tell me stuff, and I’m going, ‘Come on man, I was you. Whatever it is you’re doing, I’ve already done.’ The students, I try to have good relationships with them.”

On certain occasions, Pierce has offered food, clothes, and a place to stay to students he knew could use the help.

“Life has kicked them in the teeth, and they need help,” Pierce said.

The transactions have not been one-sided, however, as Pierce also feels impacted by the student body of TJC.

“I’ve met some absolutely phenomenal people. I’ve met a lot of really, really good people that are really, really liked. Probably what I will miss the most is ‘community policing’ with the kids. I’ve always had fun at that. I will try to meet young people, and y’all are all kids to me. I’ve helped with homework; I’ve listened to boyfriend-girlfriend problems.”

Pierce got a little teary eyed when describing what he’ll miss most.